Looking at gender and gender inequality through baby name data is something I’ve posted about before. Recently, Philip Cohen wrote a smart post thinking through how to measure whether androgynous baby names are on the rise. And it started a conversation on Twitter in which Charles Seguin weighed as well. The ideas and conversation are all revolving around a paper Stanley Lieberson, Susan Dumais and Shyon Baumann published in the American Journal of Sociology in 2000 – “The Instability of Androgynous Names: The Symbolic Maintenance of Gender Boundaries.” It’s a brilliant paper. I love it for the simplicity of the argument.

The argument Lieberson, Dumais and Baumann make revolves around tracing a rise in androgynous names given to babies (using data for white births in the state of Illinois between 1916 and 1989). They analyze what they characterize as the “accidental ways” androgynous names develop, and “asymmetric growth patterns.” Among the findings described in the paper is a powerful illustration of the cultural devaluation of femininity. As Lieberson, Dumais and Baumann put it:

“A central assumption is that androgyny is evaluated differently, depending on whether parents are naming a daughter or a son. We have seen that parents of daughters also respond to the number (or percentage) of boys with the name, but they are slower to retreat from using it. As a consequence, androgynous names end up as a predominantly female name more often than as a predominantly male name.” (HERE: 1282).

Philip charts a slow increase in the proportion of U.S. babies given names that are not sex dominant in the extreme. Charles Seguin is working on a paper analyzing this in much more sophisticated detail than I am here. But it made me go back through Lieberson, Dumais, and Baumann’s article to look at the names they identified among white babies born in Illinois to look at those names among all babies born in the U.S. and over a period of time that stretches farther in both directions.

They identify a collection of the 45 most androgynous names in their sample. And Philip developed a similar list, using national data for 2018, identifying a list of the 25 most common names that were given between 40% and 60% baby girls born in 2018. I’m really excited to see Charles Seguin’s paper when it is published. Because the data available today are just a lot more comprehensive. It made me really appreciate Lieberson’s A Matter of Taste in a whole new light, thinking about how he must have dug up all of those data on name trends, how much of it might have been transcribed, etc. It’s really impressive.

Lieberson, Dumais, and Baumann graph a collection of these names to illustrate the trend they identified in the article–the contaminating effect of femininity. Those figures are below. The dashed lines chart proportions of girls given the name, while the solid lines show those proportions for boys. So, whenever you see the dashed line increase and the solid line decline, the name was effectively feminized (i.e., it became a “girl” name) and whenever you see the solid line rise and the dashed line decrease, the name was effectively masculinized (i.e., it became a “boy” name). Their point is that once a name becomes androgynous and parents realize that, they will retreat faster from those names when giving them to sons. Androgynous names, according to Lieberson, Dumais, and Baumann are “unstable”–they argue that androgynous names that achieve a certain level of popularity don’t remain androgynous and that they’re much more likely to tip toward girls than boys because of the cultural devaluation of femininity. 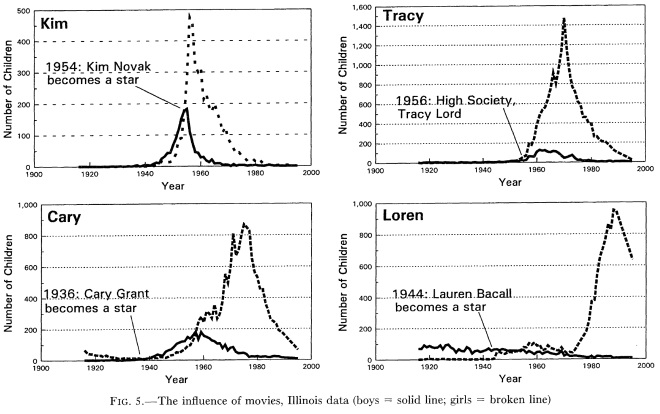 It got me thinking about their puzzle. I love teaching it. It’s such an awful example of gender inequality. And it’s so simple. But I’d never charted the names on their lists against national data. So, I did that. And in general, it produced similar results. Of those 12 names, Lieberson, Dumais, and Baumann showed three that were masculinized over time (Angel, Sean, and Corey). National data show similar results, but added another name that looks different in the Illinois data they collected: Cary. In national data, baby boys named “Cary” did decline after 1960, coinciding with a small increase in the number of baby girls named “Cary,” but the lines didn’t cross the way they do in Lieberson, Dumais, and Baumann’s data. Still, 8 of these 12 names were feminized. 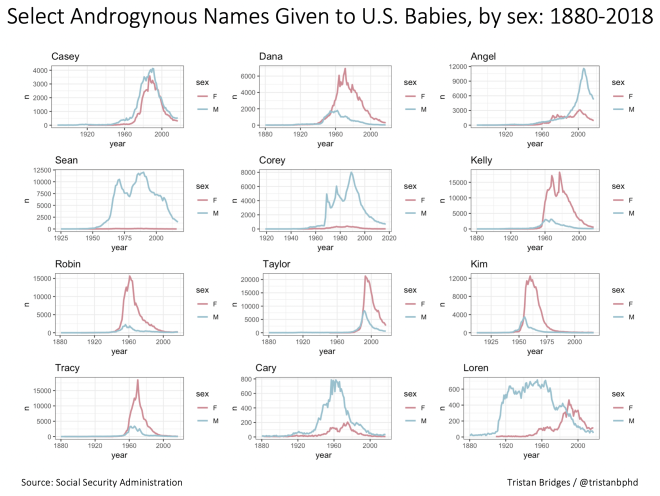 I don’t know how to identify threshold effects in data like these. But I’m struck that this might be useful. Philip’s post charts an increase in U.S. parents giving their children names that are less sex-dominant than they used to. But, to examine whether this trend will also shape the fortunes of these newly androgynous names is more difficult because we have to wait to see what happens to the names.

Because Charles Seguin goes by “Charlie” and Philip identified “Charlie” as the most popular androgynous name given to babies born in the U.S. in 2018, we thought through various iterations of names given to babies beginning with “Charl.” And this is the other point that makes studying the fates of androgynous names given to children today or recently more difficult. Lieberson, Dumais, and Baumann suggest that androgynous names often become androgynous in an accidental sort of way. Many parents today intentionally select androgynous names for their children. And Charlie is an interesting example, because their is more than one option for thinking through how to spell the name. Below are a few options along with frequencies of births to boys and girls given each name over time.

Charles also suggested that “Noa” was a name he thought was going to become a much more popular androgynous name – interesting because the name “Noah” was the second most popular name given to baby boys in 2018. Interestingly, both names started to ascend in popularity right around the same time – around 1995. 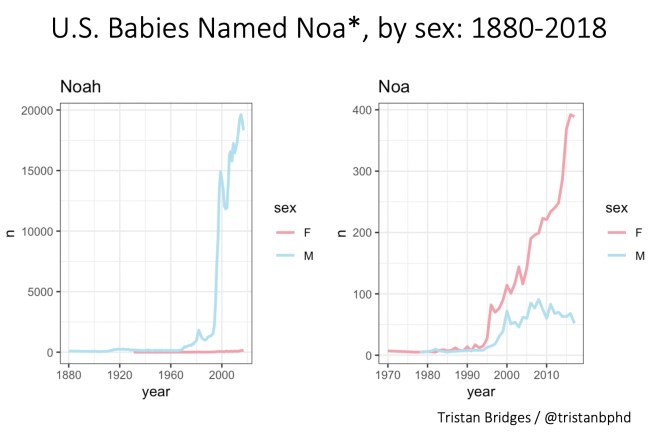 I don’t have an argument to make here. I’m just interested how the trend toward the increasingly intentionally androgynous naming of children might affect the relative stability of androgynous names over time and whether we will continue to see asymmetric contamination effects by gender.

One thought on “Trends in Androgynous U.S. Baby Names”