Last year in January, we wrote about name contamination as a telling illustration of how gender inequality is perpetuated. While a great deal of research and popular graphics examine the social forces behind which baby names become popular, name contamination refers to the ways social and cultural forces operate in steering people away from certain names. Thus, while we’d both love to see data showing that Donald Trump has effectively contaminated the name “Donald” for children born in the U.S., the data don’t support that. Donald is a name that was once rapidly rising in popularity – in the first few decades of the 20th century. But in the middle of the 1930s, “Donald” stared a free fall in popularity. The name became dramatically less popular among Americans in fairly short order. This is what scholars are talking about when they examine names that seem to be “contaminated.”

The source of the contamination? It’s Donald Duck, the character created by Walt Disney Productions in 1934. After Donald Duck, people just have never selected the name “Donald” for their babies in the same numbers. In his book, A Matter of Taste: How Names, Fashions, and Culture Change, Stanley Lieberson used Donald Duck as an example of “The Symbolic Contamination of Names,” tracking the name in California data and concluding the decline was probably triggered by the success of the Disney character.  Trump did not have this effect. In fact, Trump’s election and presidency has yet to register any effect on the number of baby boys in the U.S. named “Donald” – it just keeps trending steadily downward. Maybe Trump’s long-time celebrity means any further contamination associated with his name was already baked into the trends.

On the other hand, Melania and Ivanka – the two highest-profile women of the Trump family – might be provoking some identifiable name contamination. Both are quite rare names, with less than 400 girls given either name in 2018. And yet they have trended together quite closely since 1988, and both increased in 2016 and 2017 before taking a steep downward turn in 2018. We’ll have to keep an eye on those.

But last year, we were particularly interested in the name “Harvey.” The year 2017 was a big one for Harveys. Between the sexual violence of Harvey Weinstein and Hurricane Harvey. In our initial post, we discussed it as a quasi-natural experiment in what it takes for a man’s name to be contaminated? And this all happened in the middle of a very recent trend of the name Harvey becoming much more popular among Americans in very recent history. Most names that were once popular but are no longer never return to their former popularity. Some bounce back, like “Emma,” “Eleanor,” or “Oliver” have in recent history. Harvey was bouncing back, part of a resurgence of popularity of names that were previously popular in the first half of the 20th century.

Harvey appears to have been contaminated in 2017. Like “Forrest” following Forrest Gump, “Monica” following the news of President Bill Clinton’s affair with Monica Lewinsky, “Ellen” following Ellen DeGeneres coming out publicly (see here), “Hillary” following Bill Clinton’s term in office as President, “Alexa” following Amazon’s release of their digital assistant, and many others, Harvey seems to have started to become contaminated. One way of looking at this is by examining changes in the rank of the name among boys born in the U.S. (below). 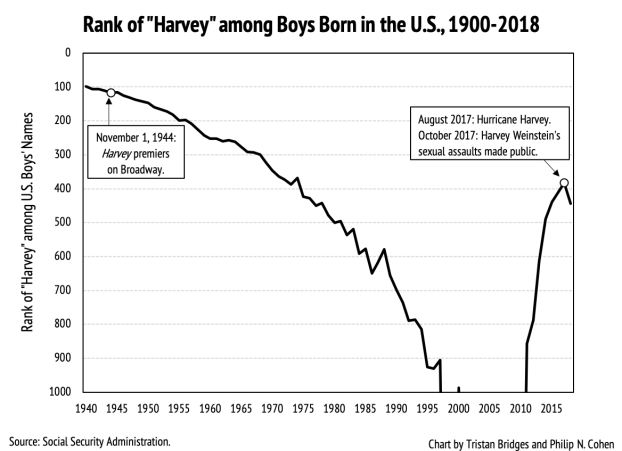 While we see that Harvey was quickly rising up the ranks of name in recent years, the ranking of Harvey seemed to change its trajectory of popularity quickly in 2017. But, we also know that popular names used to be a lot more popular than they are currently. So, name rank is not a great measure to consult when considering whether a name has been contaminated.

Another measure to use is to consider the number of children born each year given the specific name. This might seem silly. But, as Philip has shown before, the best predictor of how many children are given any specific name this year is how many children received that name last year. When names buck this trend, the number of children given the specific name either increases substantially or decreases. Below, we charted the actual numbers of boys in the U.S. given the name Harvey since 1940 (the end of the period in which Harvey was popular in the first half of the 20th century).

By all of these measures, Harvey appears to have been contaminated. Name contamination is an important indicator of society’s values. Shifts in the name “Forrest” tells us something about inequality associated with ability. Changing in naming babies “Ellen” tells us something important about sexual inequality. Shifts in the names “Monica” and “Hillary” offer new powerful illustrations of the double binds women face in societies shaped by institutionalized forms of gender inequality. “William” was not contaminated following Bill Clinton’s affair. The popularity of the name “Clarence” did not noticeably change course following Anita Hill’s public accusations of sexual harassment. Harvey did.

There are a lot of ways to study cultural patterns today, including analysis of big data sources, such as social media posts and archival text mining. Names have something in common with these methods, but we like to study names because, unlike Facebook posts or tweets, they represent decisions that people consider very consequential – very personal, symbolically representing weighty statements of identity – and they are measured on a very large scale over a very long period. On the other hand, it’s impossible to know from these data exactly why people use the names they do. Name contamination is a good case because sharp reversals of fortune, such as that shown by “Harvey,” have readily interpretable causes.

In this case, although people debated the merits of the #MeToo movement, and what its impact would or should be, it appears that fewer people wanted to be associated with its leading man. Or maybe it was just the hurricane.

Note: Thanks to Charles Seguin for noting that Stanley Lieberson first discussed “Donald” as a good illustration of name contamination in A Matter of Taste.

One thought on “Baby Names and #MeToo, Take 2”