By: D’Lane Compton and Tristan Bridges

The 2018 General Social Survey data was just recently publicly released. Along with collections of social scientists interested in shifts in the various opinions measured on the GSS, we were eager to see how things shifted. We were particularly interested in the GSS demographic questions on sexual identity. As of 2018, it has officially been one decade that GSS has been asking the question. Over the course of that period of time, GSS has conducted six waves of data collection. To characterize your sexual identity on the survey, you can self-classify as “heterosexual or straight,” “gay, lesbian, homosexual,” “bisexual,” or “don’t know.” (Note: measuring sexuality on surveys poses a series of notorious challenges. This is one way of thinking about asking people about sexuality, but one among many options – see here for a discussion.)  As we have both noted previously, different surveys ask this question in slightly different ways, which makes direct comparisons across instruments messy. While the proportions shift around a bit by survey, the trends discovered on each about growth in LGB identity and the populations among whom that growth appears to be happening have been generally comparable across instruments in the past.

Some data on shifts in the LGBT population don’t share the data publicly allowing people to assess where change is happening. Gallup reports on the data they have collected in two waves of surveys in this way. But, as Tristan has noted before, reporting on shifts in the LGBT population treats the group as homogenous and artificially presents growth in LGBT identity as though it might be equally distributed among the L’s, G’s, B’s, and T’s. But that’s not true. Bisexual women account for the lion’s share on the growth in LGBT identification. And as Tristan and Mignon Moore showed in 2016, young Black women account for a disproportionate amount of the growth in LGB identification.

Gallup reported that much of the change in LGBT identification between 2012 and 2016 could be accounted for by young people, women, college-educated people, people of color, and those who are not religious (see here for a summary of the highlights). Data from GSS too has shown an increase in LGB identification between 2008 and 2018. The GSS is a smaller survey than Gallup. But the trends in sexual identification appear to be on trajectories and reasonable if we consider increases in social tolerance rates and queer visibility in mainstream media. They are not extreme and lie within smaller or similar ranges of measures from prior “national surveys” of sexual behavior, including but not limited to Kinsey’s (1948, 1953) work and Laumann et al.’s (1994) findings from the early 90s. 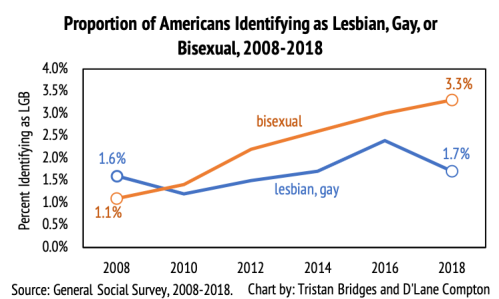 This is consistent with other national survey work. For example, the National Survey of Family Growth (NSFG) conducted by the U.S. National Center for Health Statistics was initially designed to be the national fertility survey of the United States and sought to explain trends and group differences in birth rates, such as contraception, infertility, sexual activity, and marriage. Compton, Farris and Chang 2015 found that almost nine percent of the women in the sample and about four percent of the men in the sample in 2008 and 2002 reported behavior as bisexual; that is, having sex with at least one male and at least one female partner in their lifetime. With regard to self-identification as bisexual for women, in 2008 0.43% and in 2002 0.26 percent. For men, in 2008 0.38% and in 2002 0.69% identified as being sexual. From this data we see how behavior and identity do not always align (which other work has noted as well). But these data do support the trends identified in GSS data, and might allow us to speculate that perhaps with increases in social tolerance rates people are more likely to claim bisexual identities than used to be the case regardless of their participation in the behavior.

Previous work has also suggested that much of the growth in LGB identities is happening among women. The GSS data show that the shift appears to be primarily happening among bisexual women. Indeed, bisexuality continues to be a more popular sexual identity than lesbian among women, but a less popular sexual identity than gay among men, as others have shown. As of 2018, almost 6% of women responding to the survey identified as bisexual compared with 1.5% in 2008. Comparatively, shifts in lesbian identities among women and both gay and bisexual identities among men really haven’t shifted much. 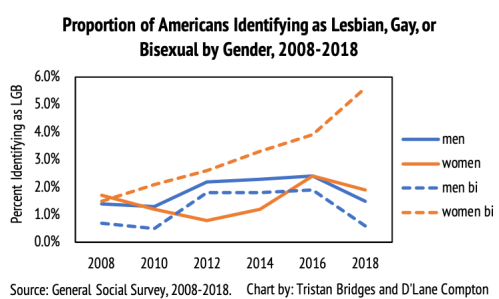 And similar to previous analyses (here, here, and here), this shift is particularly pronounced among the young. The figure below shows changes in lesbian and gay identities alongside shifts in bisexual identities for four separate age cohorts. The real shift in among bisexual identification among 18-34 year-olds. Between 7 and 8% identified as  bisexual on the 2018 GSS survey. This is all the more interesting when you look at the 2008 data on these figures. Bisexuality did not stand out in these data in 2008. In fact, in 2008, more people identified as lesbian and gay than bisexual. This shift has emerged and grown in an incredibly short period of time. 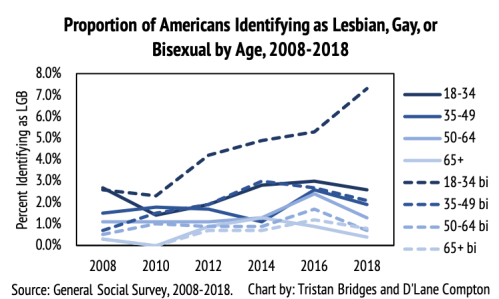 As other data has shown as well (see here and here, for instance), people of color account for a disproportionate amount of this shift. Black bisexuals accounted for almost 7% of Black respondents on the 2018 GSS. That’s a big shift as well. And while bisexual and lesbian/gay identities were moving along similar trajectories for Black Americans through 2016, as of 2018, bisexuality was much more common (as has been true for White respondents and those of other races… yes “other race” is actually the category GSS uses… and no, it’s not a good idea). 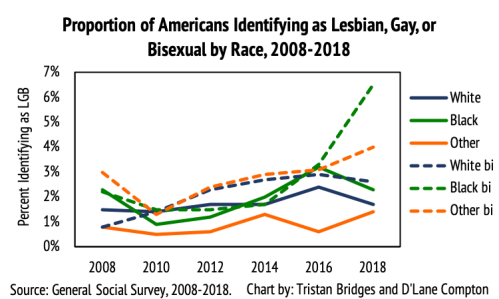 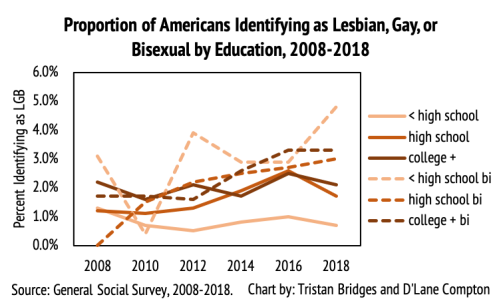 Similarly, the subjective class identification data for sexual identity are all over the place. Part of this is a product of the vast majority of GSS respondents self classifying as working and middle class (see below). The slight trend that does seem generally visible is that lower classes have higher rates of LGB identification. Upper class (identifying) bisexuals are an outlier here, but they have also shifted a great deal in the last three waves of data collection and this may also be a product of “upper class” having the lowest numbers of respondents subjectively identifying with that class status. So, small n’s sometimes make for spiky graphs. 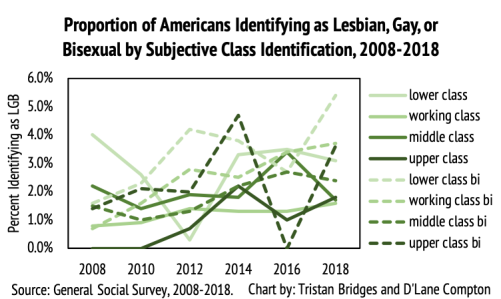 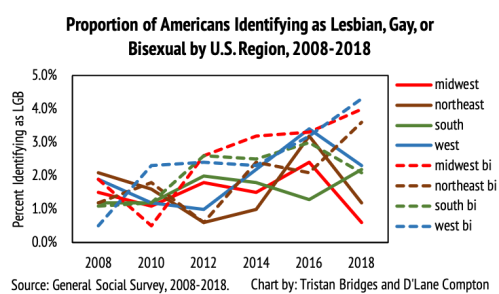 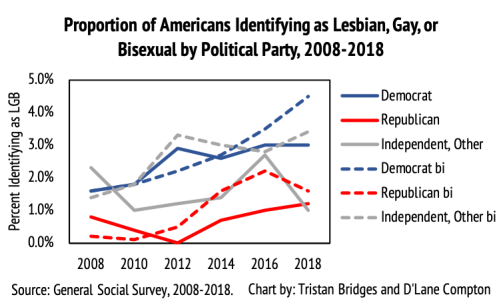 So what do we do with all of this? What can we take from the shifts? One thing that we ought to take from this is to take scholarship on bisexuality more seriously. Both of us have commented on this before. As a sexual identity, bisexuality is less studied than it ought to be. But bisexuality has continued to grow and continues to represent a larger number of people’s sexual identities than lesbian and gay combined. This is interesting for a number of reasons, but one is that much of the growth in the LGBT community might actually be the result of changes in the population of bisexual identifying people (and this is a group that is disproportionately composed of women). Whether bisexual identifying people understand themselves as a part of a distinct sexual minority, though, is a question that deserves more scholarship.

We should care about bisexuality as a sexual identity, because as a sexual identity, it is one that continues to be on the rise. And, as both of us has written about previously, if we are going to continue to group bisexuals with lesbian women and gay men when we report on shifts in LGB populations, this might be something that deserves better understanding and more attention. Context matters in how we understand identities and how they change or evolve over time.