The planning of modern homes takes babies, children, and safety into consideration a bit more (mildly put) than did earlier architectural design.

In some early colonial homes, small items (pictured to the right) have been found, often located somewhere on the floor of the main room. Initially it was thought to be something to house firewood, though it didn’t seem capable of holding much, and the slat that sits perpendicular to the box on the inside wall made little sense. It took observers a while to realize that this contraption was a device for holding children—a “baby tender.”

Baby tenders existed for two reasons: to give parents time without the infant and to ensure the baby’s safety whilst the parents were away.

The most dangerous part of a colonial home was the open hearth. Necessary for both warmth and the “one-pot meals” that characterized early American family eating, the open hearth was an essential, yet simultaneously lethal, aspect of early American homes. Children were routinely injured, and sometimes died as a result of burns.

But the reason that we didn’t initially guess that the crate above was for babies had nothing to do with the dimensions of the crate or a misunderstanding of the dangers of fire. Rather, it had to do with a fundamentally different understanding of children. Today, we simply “see” children differently than they did in colonial America. If you’re anything like me, feeling as though anyone could look at an infant and feel anything other than love, affection, and a strange desire to nuzzle those chubby little cheeks seems almost impossible. Yet, these feelings and desires are actually part of a larger ideological shift in cultural conceptualizations of childhood. And this shift had architectural implications–ones that were slower to come about.

Simply put, children were simply not always understood as “children.” Philippe Ariès, historian and author of Centuries of Childhood: A Social History of Family Life (1962), famously argued this point with an extensive review of art, literature and all variety of 16th – 19th cultural depictions of young persons in France found that our contemporary understanding of children are historically novel. Ariès argued that medieval children were best understood as miniature adults. Similarly, Vivianna Zelizer charts the transformation of childhood from profane to sacred in Pricing the Priceless Child: The Changing Social Value of Children.

In Huck’s Raft, Steven Mintz explored this issue in the U.S. with similar findings. Rather than as a biologically determined stage of life, “childhood” is a social construct. Childhood didn’t always exist, at least not as we understand it today. As Mintz argues:

Two centuries ago, the experience of youth was very different from what it is today. Segregation by age was far less prevalent, and chronological age played a smaller role in determining status. Adults were also far less likely to sentimentalize children as special creatures who were more innocent and vulnerable than adults. (Mintz, here: 49)

Though ideologies regarding children shifted, home architecture was–perhaps understandably–slow to adapt (I posted on this issue in more recent history here). Homes were not instantly equipped with nurseries and the safety equipment and devices seen as necessary for households today. Rather, these things slowly emerged as an understanding of the necessity of spaces and rooms designed for children in the home gradually took hold. Baby tenders and the like were still used, even as these items might have started to acquire new meanings. 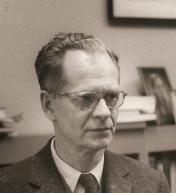 The famous behaviorist BF Skinner even claims to have used a baby tender, and though it’s tempting to joke that he put his child in one of his famous Skinner boxes, this is not how he describes it at all (here). In fact, he talked about his baby tender in a way that illustrates this shift. Skinner’s comments illustrate the change in understanding children as not only in danger, but as the “innocent” and “vulnerable” beings Mintz describes above.

In the early 1900s, families living in the city (and increasing numbers of American families were moving to urban settings) faced a new set of dilemmas. Like Skinner, and prior to his parenting experiences, families faced new conceptualizations of children’s “needs,” and of the consequences of not fulfilling them. But homes were not necessarily immediately well-equipped to help parents fulfill these needs.

And families living in urban highrises struggled in historically new ways. They moved to the city as industrialization quickly called them in, but came during a period in which ideas and ideals surrounding childhood were transforming. Fewer people–now primarily women–became completely responsible for children, but they were also burdened by new requirements in domestic upkeep. This was part of the process through which the “cult of domesticity” became established. Just as we started understanding babies as requiring more time, affection, and attention, fewer people were present to help provide it–or understood as responsible for it. 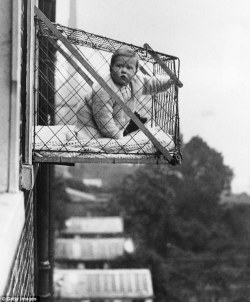 By 1922, this prompted an industrious young American, Emma Read, to patent a device–the “portable baby cage”–that helped bridge the gap between “modern” conceptualizations of childhood and transformations in home architecture. Pictures of baby cages in London were made popular by an Atlantic article. These cages are so odd by contemporary standards because our conceptualization of childhood has more completely transformed. While the item was referred to as a “cage”–in some ways, not so different from colonial baby tenders–they are discussed in ways that illustrate changes in how babies were understood.

Like Skinner’s explanation of his own use of a baby tender, Emma Read describes baby cages in a way that highlights the unique needs of infants and how this labor-saving device can help parents attend to these needs (which Read assumed would be more challenging to attend to for parents in crowded cities). The cage was intended to help parents ensure their children received “the proper fresh air” and “exercise.” Read described its use in this way: 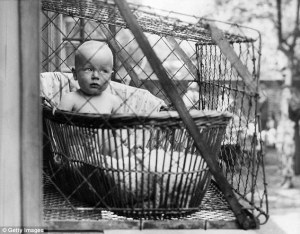 This article of manufacture comprises a housing or cage, wherein the baby or young child together with proper toys may be placed. The baby is enabled to receive fresh air through the screen or wire fabric, and it will be noted that the baby has sufficient room or space for playing with toys. Furthermore suitable bed clothing may be arranged in the cage or housing, when suspended adjacent the window or the house or apartment, so that when it is time for the baby to take a nap, the bed clothing may be be made up in one corner wherein the baby may sleep. (here)

While Read is preoccupied with managing to get “fresh air” to children in her evaluation of the importance of the “baby cage” (a preoccupation with the circulation of fresh air was something that plagued Victorian architects as well), the cage accomplished something else as well. Baby cages also quite literally extended the boundaries of the home’s “interior” in ways that allowed city dwellers to find space for the baby. Baby cages are a really interesting solution to the lack of architectural and social provisions seen as newly necessary for children, and are an illustration of the transformation of cultural conceptualizations of childhood. For instance, Emma Read seems unconcerned in her patent with ensuring that adults receive fresh air. This is because Read understood children’s and adult’s needs as distinct–and this belief is an essential piece of the cultural transformation in our understandings of children and childhood.

24 thoughts on “On the Social Construction of Childhood: Making Space for Babies”