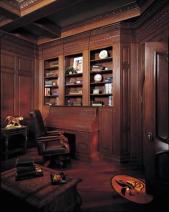 In Victorian houses, there are simply too many rooms by modern standards.  The idea was to have a separate room for separate activities, replacing the old idea of simply moving furniture around the room to suit various purposes throughout the day.*  One of the rooms I find fascinating is the “smoking room” in Victorian homes.  Tobacco was sort of a fad in England in the 1800’s, but not everyone was a fan.  Smoking rooms emerged for a few reasons.  Initially, the smell of tobacco was thought odious and people smoked outside.  But gradually, people became accustomed and the practice moved indoors.  Inside the house, smoking rooms became assigned, so I’ve read, because women did not want men smoking throughout the house.  It was a room designed to segregate a very specific activity to one room in the home–a room that was not accidentally situated far away from bedrooms, the kitchen, and dining areas.

Smoking rooms were also outfitted with their own specific interior design.  Perhaps most characteristic of the room was the rampant and excessive use of velvet.  Home owners had velvet curtains made, some of the furniture was upholstered with velvet and smoking jackets were routinely made of velvet as well.  The velvet was thought to absorb smoke to rid its odor from the rest of the house.  It’s also true that smoking really ruined rooms, drapes, upholstery, and more.  So, having it relegated to a single room was probably a good idea practically as well.  Dining rooms were actually initially used for similar reasons (we began to use dining rooms right around the same time that we began upholstering furniture en masse).

Smoking rooms were intended to be used after dinner.  The women might gather in the drawing room** and the men would retreat to the smoking room.  As such, it was common practice to decorate the room in a “masculine” style.  Many men displayed gun collections there, decorated the room with Turkish themes (as Turkish tobacco was what they were likely smoking, popularized after the Crimean War), “worldly” books and objects, and more.

Interestingly, the room was established to restrict smoking to a very small proportion of the living space.  Women had an interest in doing this as women are thought to have widely detested the smell (and who can blame them if they did).  Yet this spatial segregation gradually took on greater significance and ulterior use.  It helped to reestablish separate gatherings after dinner, which structurally provided a space in the home where men could talk about things without women.  It’s a wonderful example of one way in which Pierre Bourdieu understood inequality–it is often reproduced unintentionally through our own choices and desires.

Smoking rooms are largely an element of our past.  After acknowledging the health risks associated with smoking, many spaces segregate smokers from non-smokers.  I remember as a child sitting in the non-smoking section on an airplane.  In fact, no smoking indicator lights still exist on many planes.  They’re indicator lights–rather than signs–because pilots used to allow smoking during certain portions of the flight and not others.  Increasingly, we’re starting to adopt a more Victorian attitude toward smoking–extreme seclusion.

Smoking clothing is largely a thing of the past as well.  The 1950s marked an era when smoking jackets in the U.S. began to lose their consumer base.

Other than Hugh Heffner, you’d be hard pressed to find someone who wears one with any degree of seriousness.  Interestingly, Heffner’s choice of jacket is important because it recalls a time when (and even a room in which) men could “be men.”  Perhaps men think of smoking rooms when they desire a “masculinized” area in their own homes.  But, if that’s the case, it’s probably important to remember that men did not originally elect to smoke in smoking rooms; they weren’t permitted to smoke anywhere else.  As a result, the rooms themselves developed a culture and style all their own.

*In French, the word for furniture (les meubles) literally translates to “the moveables.”

**I think “drawing room” sounds like some sort of activity room, but it was actually shortened from “withdrawing room,” and was a space that families could withdraw to gather privately for time together.  This is a room that gradually came to be known as the living room.