By: Tristan Bridges and Sarah Mosseri

Cross-posted at The Fifth Floor

Beliefs about inherent differences between men and women are pervasive.  Thinking about men and women in opposition to one another is a belief system, and one in which our culture puts a great deal of stock.  Gender differences are promoted by popular culture and are subtly (and sometimes not-so-subtly) reproduced through our basic institutions such as the family, education, and the military. So-called “natural differences” are also called upon to justify and reinforce gendered divisions of labor by suggesting that women and men are somehow naturally suited to different kinds of work.

As with most socially constructed distinctions, the notion of “separate but equal” does not apply here.  The prototypical “feminine” work is care work (e.g., teacher, nurse, social worker, flight attendant), and professions organized around “care” account for a huge proportion of women’s paid work.  Barbara Reskin and Patricia Roos (here) report that roughly one third of the 66,000,000 women in the formal labor force in the early 2000’s could be accounted for by only 10 (of the 503) occupations listed on the U.S. Census!  Not much has changed in more recent history either.

Now recognized as “occupational ghettos”, these female-dominated care professions are associated with a great deal of work, lower levels of cultural status and prestige, and often less pay as well.  As a phenomenon, occupational segregation may well account for the majority of the gender wage gap.  According to Maria Charles and David Grusky (here), occupational segregation persists less because we think of men as better and more deserving of the higher status and higher paying jobs and more because of our collective investment in the idea that men and women are simply naturally suited to different sorts of work.

Nursing is one example of this.  An area of care work, nursing is a female-dominated occupation that has suffered from the effects of gendered devaluation—an issue that has made it difficult to recruit men into the field. As Paula England argues, “Because the devaluation of activities done by women has changed little, women have had strong incentive to enter male jobs, but men have little incentive to take on female activities or jobs” (here).

Intending to challenge the femininity of nursing and to directly target men for recruitment into the field, the Oregon Center for Nursing (OCN) launched the “Are You Man Enough To Be A Nurse” campaign. 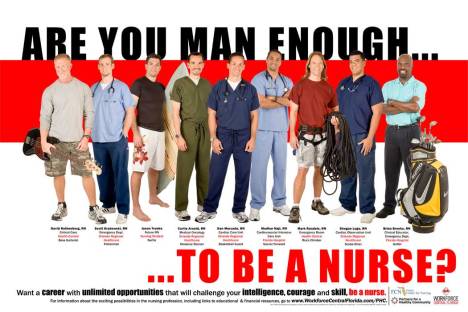