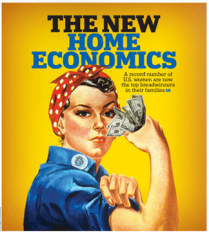 Heterosexual married women with children are out-earning their husbands in record numbers. Philip Cohen calculated that about 23% of such couples are those in which women earn more income than their husbands. This may sound like a small proportion. Yet, as Cohen notes, “it’s an increase from 4% half a century ago.” So, before I question the debate, I just want to note that some significant shifts in gender relations and household earnings have taken place, likely exacerbated in recent years by the toll of the recent recession.

Yet, discussions of “breadwinner moms” are also part of the so-called “end of men” debate, wherein men are seen as being out-earned, out-educated, and out-done by women in all of the formerly male historical preserves. Framing women as “the richer sex” or transitions as somehow evidence of “the end of men” is premature and inaccurate.*

Though women’s wages have increased in recent years while men’s have declined, focusing solely on these two facts fails to take into account where men’s and women’s wages started. The wage gap has reduced, but most estimates find that the gender wage gap is still somewhere between 77 and 81 cents on the dollar. Women’s salaries, on average, have remained lower than men’s (despite the closing gap from both directions). Beyond this, women remain disproportionately more likely to be poor. Coontz presents this as – at best – “a convergence of economic fortunes” rather than something like “female ascendance” (here).

Although it’s premature to claim that women are somehow replacing men atop the economic food chain, as I said before, some significant changes have occurred. A recent Pew Report on Breadwinner Moms documents that in just over 40% of households with children under the age of 18, women are either the sole or primary breadwinners. Including single mothers in this category might seem a bit unfair as these women are sole breadwinners by default. But, Philip Cohen compares married heterosexual households with children under 18 (here) to discuss the trend. Cohen’s big critique–and I agree with him–is how we’re classifying “breadwinner moms” and what this classification conceals. The way it’s measured classifies any woman in a heterosexual couple who out-earns her husband by $1 a year as a “breadwinner mom.” This stretches the meaning of breadwinner just a bit. As Cohen documents, in about 38% of married couples in which wives out-earn their husbands, they’re only bringing in between 50 and 60% of the household income. That is, for women, the most common way that they occupy the status of “breadwinner.” And if we add in those couples in which wives are earning 50-70% of the income, that accounts for about 62% of “breadwinner moms.” Cohen suggests that the vast majority of this shift in household earnings is better understood as “breadsharing” than “breadwinning.” Conversely, the most common way men occupy the breadwinner status remains earning 100% of the household income.

So, the discussion of “breadwinner moms” as 23% of heterosexual, married couple households with children under 18 conceals the fact that while this number does show considerable change, breadwinner moms and breadwinner dads exhibit remarkable differences–not least of which is the relative amount of bread they are “winning.”

So, what’s missing? I was struck by another thought that’s a bit more challenging to make sense of with quantitative data: how are husbands and wives making sense of their two incomes in these dual-earner families in which women are earning more than their husbands, but not by leaps and bounds? Do these women understand themselves as “breadwinner moms”? Do they benefit in some measurable way from this status?