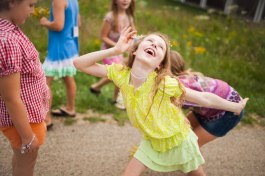 Slate ran a story last week about a camp for boys who prefer to bend gender.  Photographer Lindsay Morris has created a photo-documentary of the boys at camp.  She gives the camp a pseudonym (for obvious reasons).  She calls it “You Are You.”  I like avoidance of gendered pronouns in the title she selected.  The images are wonderful.  They depict an space in which playing with gender boundaries, meanings, and more is the norm, not the exception.

Children become socialized into the world we know in various ways.  And I believe that if we want the boys, girls, and more from our children’s generation to live in a world with less gender and sexual inequality, we have to not only teach them to question and push boundaries, we have to be willing to let them teach us. 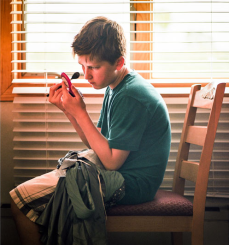 Children still ask questions about things that we might have learned to accept without thinking.  And we can learn a great deal about gender and the potential for change from examining the aspects of life they might be better positioned to question than we are.

In a recent post with D’Lane Compton, I shared a story of a young girl coming up and pointing at my son in the grocery store, asking her mother a series of questions about him that ended with, “Will he always be a boy?”  The mother assured her daughter that he would, and I couldn’t help but think, “Well, with repeated acts like that over the course of his life, he’d certainly think twice before deciding otherwise.”  I didn’t share these thoughts with her or her child, but it was an experience that left a mark (on me anyway).  At You Are You, it seems as though that’s not a question considered worthy of asking or answering—at least when they’re at camp.

END_OF_DOCUMENT_TOKEN_TO_BE_REPLACED

I once heard a transgender woman give a talk about the process of socially transitioning to being recognized as a woman. She discussed various decisions she made in taking some final critical steps toward the social identity of woman.  She talked at length about her hair. She asked, “What kind of woman am I and how is my haircut going to indicate that?”  She talked about being preoccupied with her hair for a long time as she attempted to figure out a cut and style that “felt right.” But what struck me the most was her discussion of carrying a purse.  She said that getting used to carrying a purse everywhere was one of the more challenging elements of the transition.  If asked what I thought would be a significant everyday challenge if I were a woman, I don’t think purse would have been high on my list.  But, it was high on hers.  She discussed remembering to bring it, how to carry it, norms surrounding purse protection in public, but also more intimate details like: what belongs in a purse?

Purses and wallets are gendered spaces.  There’s nothing inherent in men’s and women’s constitutions that naturally recommends carrying money and belongings in different containers.  Like the use of urinals in men’s restrooms, wallets and purses are a way of producing understandings of gender difference rather than as a natural consequence of differences. 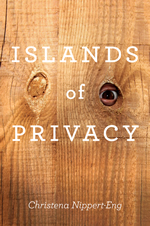 After collecting responses, she documented all of the contents and created categories and distinctions between objects based on how people thought about them as public or private.  One question that was clearly related to privacy was whether the objects were personally meaningful to the participant.  Invariably, objects defined as more personally meaningful were also considered more private. 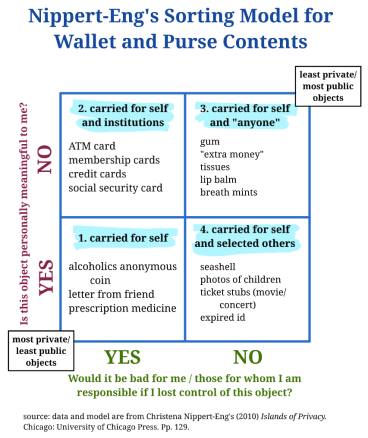 END_OF_DOCUMENT_TOKEN_TO_BE_REPLACED

Women’s participation in athletics has been one of the victories of the feminist movement.  Policies like Title IX demanded equal access and funding (even if that hasn’t yet been realized) in federally subsidized programs.  Though the amendment had to do with much more than women’s participation in sports, this is what discussions of Title IX are often all about.   Title IX stated,

No person in the United States shall, on the basis of sex, be excluded from participation in, be denied the benefits of, or be subjected to discrimination under any education program or activity receiving Federal financial assistance… (Title IX)

But, while women’s basketballs are slightly smaller, softballs are much larger than baseballs–a feature that necessitates differences in pitching, hitting, and throwing the balls.  Men’s and women’s athletic outfits also differ.  Consider men’s vs. women’s professional tennis clothing.  But, gendered performance expectations are also lying behind many of the rituals and traditions we hold most dear in many sports.

In watching 2012 Olympic trials for gymnastics, there was one moment during Anna Li’s routine on the uneven bars that caught my attention in the sportscaster conversation following the judging.  We often don’t think about gender performance expectations; we simply don’t have to.  They don’t even typically feel like expectations because many of us are eager to take part in them.  But when gender expectations are disrupted, we know something significant happened, and there is typically a great deal of collective work done to repair the breach.  Anna Li did just such a thing.  I’m not incredibly knowledgeable about gymnastics, so I missed it when it happened, but the significance of the event was not lost on more seasoned fans and commentators.

END_OF_DOCUMENT_TOKEN_TO_BE_REPLACED

When sociologists discuss performance theories of gender, we usually go back to Candace West and Don Zimmerman’s (1987) famous article “Doing Gender.”  Some of us date this trend to Judith Butler, but few people bother to discuss some of the scholarship that predates this.  West and Zimmerman relied almost exclusively on Harold Garfinkel’s* analysis of Agnes (a transgendered women who he met with as a part of a UCLA study dealing with “deviant” gender identities) to support their conceptualization.

Beyond the use of data, West and Zimmerman’s article was written in conversation with Erving Goffman’s theory of gender, or of “gender display” as Goffman wrote about it.  Goffman wrote two pieces exclusively about gender.  The 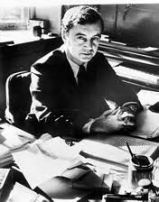 first was originally published in Studies in the Anthropology of Visual Communication (1976) and later published as a book–Gender Advertisements (1979)–which included the essay along with a host of advertisements that Goffman codes for different elements of gender display (for a great exploration of this, see Greg Smith’s work here).  The second is his better known and cited article in Theory and Society: “The Arrangement between the Sexes” (1977).  He wrote elsewhere about gender as well, but these were his two pieces of writing that were really dedicated to theorizing about gender.  For instance, the Goffman quote that Michael Kimmel (1994) used to discuss Connell’s conceptualization of “hegemonic masculinity” actually comes from Stigma (1963).**

While we have come to celebrate “Doing Gender” as one of the first pieces to actually break with the biological determinism of sex role theory, along with some notable others (see here and here for two of my favorites), Goffman’s lack of status as a “feminist” makes him an unlikely person to be remembered among this list.   END_OF_DOCUMENT_TOKEN_TO_BE_REPLACED