Monuments are the sort of thing that don’t always demand our attention. Sometimes, they fade away and become part of the scenery. But at one point, someone or some group of people spent a lot of time thinking about what to put there, what it said about “us”, and more. Sometimes, people vote on them and occasionally there’s a controversy surrounding them after they’re officially unveiled or when they’re being proposed. But after they’re all set up, most of what they do is just sit there. Monuments are, most days, most of the time, sort of mundane objects in our lives–symbols of who we are (or who we were) the litter our paths through parks and on city sidewalks. And while we sometimes walk by them without taking notice, they are not symbols devoid of meaning, or power. 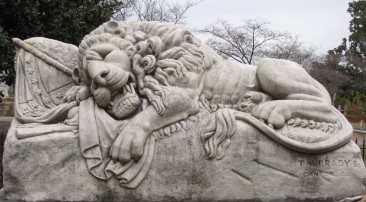 Imagine a young black child in elementary school living in Atlanta, GA driving to school down Martin Luther King, Jr. Dr., past Oakland cemetery.  There’s a beautiful statue in the cemetery of a lion sprawled atop a stone clutching a confederate flag. The lion was originally commissioned by the Ladies Memorial Association (groups of, predominantly, wealthy white women than popped up throughout the South after the Civil War to commemorate Confederate soldiers and produce monuments honoring them). The lion of Atlanta was commemorated on April 26, 1894, dedicated to “UNKNOWN CONFEDERATE DEAD.” And there he sits today.  There’s a monument to a Confederate general in that cemetery as well. And it’s not all that far from Joseph E. Brown middle school–a school named for the governor of Georgia from 1857-1865 (eventually a U.S. senator as well), a leading secessionist in his day among those leading the state of Georgia to join the Confederacy. Today, according to the Southern Poverty Law Center, Joseph E. Brown middle school educates a student body that is more than 98 percent black!

It is unconscionably ignorant to suspect that these symbols that litter our environments have no appreciable impact on people–particularly those of us to whom these symbols do violence. Slavery may be abolished by the law of the land, but young black children can still walk by monuments presenting those who fought for slavery as heroes, mighty beasts mourning those who died to keep others enslaved.

I’m not teaching the introductory class in sociology this semester.  But when I do teach intro and I’m explaining what culture and cultural inequality are to students, I like to rely on concrete examples to illustrate the issues.  The Confederate flag is an important cultural symbol to be discussed right now with this lens, as are Confederate monuments.

Michael Kimmel, Amy Aronson, and I collected the data from the Southern Poverty Law Center on Confederate sites in the U.S. for an interactive visualization. It’s in the Culture chapter as a way for students to consider the relationship between culture and inequality. Below, you can see a map of Confederate monuments still standing in the U.S.

And below here, you can see schools still standing named for Confederate leaders. It’s not the only way racial inequality continues to persist. But it’s an important way this happens, and it’s one that seems an obvious choice if we want to think about what we can do to challenge racial inequality.

Lots of visualizations have been circulating relying on data from the Southern Poverty Law Center to visualize Confederate monuments, hate groups and more. It’s an important issue. And I hope we continue to challenge this legacy.

One thought on “Confederate Monuments in the U.S. and Cultural Inequality”