I posted a while ago about our last trip to a zoo (The Denver Zoo, actually—during our trip out for last year’s ASA conference).  Today, we visited the Buffalo Zoo, which is actually one of the oldest zoos in the country.  Zoos are fascinating places.  They still have the stink of empire and colonization to me.  But, I’ve been sociologically interested in zoos ever since seeing Marjorie DeVault present on some of her research concerning zoo visits and family life.  Zoos are an extraordinary example of how families learn to look at the world in similar ways.  Parents teach children how to position themselves to look at something, to be mindful of others (or not), what to look at, what is “important” (animals) and what should be ignored (fences, cages, and plant life), etc.  It is through small practices like this that intimate groups (like families) collectively reaffirm themselves.

For instance, most visitors passed right by a rhinoceros lying down in a pool to cool off.  The rhino was mostly concealed beneath the water.  But, rhinos are my son’s favorite animal of late.  So, while a half-hidden rhino doing nothing but shaking her ears is something many people chose to walk by, our family stopped because it’s significant to Ciaran.  And in stopping, we collaborated in producing a small family ritual—one of those insignificant moments that is part of what makes us “Us.”

A great deal about zoos has changed since I was young.  I remember being able to ride elephants and camels.  I remember exhibits constructed in such a way that animals could not hide from view.  Not today.  Habitats today are more expansive, often permitting animals the ability to put themselves “on display” or out of sight.  Perhaps our understandings of the psychological consequences of captivity on (some) animals have changed.  Or perhaps our collective beliefs about animals themselves have changed.  Either way, exhibits are dramatically different than I remember as a child.

Beyond the spaces themselves, technology has dramatically altered the ways in which people interact with the exhibits.  Witnessing the exhibit often felt secondary to digitally documenting the visit.  So, unable to turn off my inner sociologist, I started documenting the documenters.  I watched a family of four come up to a habitat, each with digital cameras of their own.  They all took pictures, glancing briefly at the pictures each person took, took a few more, and moved on to the next exhibit.  Sometimes, someone took pictures of the signs, too.  Perhaps this was to remember a few facts about the animals they were so busy photographing.  Capturing the animal in an interesting pose (like this shot of my son looking at the otters) was prized.  But, getting the shot was a must.  Groups often didn’t move on until everyone with a camera got a satisfactory shot.

Well, as it happens, I’m also in the midst of finishing a syllabus for my Introduction to Sociology course.  During the week on intimacy and family life, I’m assigning a wonderful short essay by CJ Pascoe on how technological changes have (and have not) affected intimate relations among contemporary youth.  I couldn’t stop thinking about her essay while walking around looking at people looking down at their cameras, iPhones, and tablets to look at animals.  Are these peoples’ experiences of the zoo somehow harmed, less “authentic,” or less meaningful as a result of these new technologies?  Or—as Pascoe argues is the case for 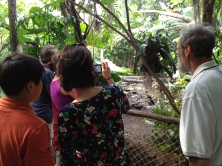 While these [technological] developments are significant, fears about what they mean do not accurately reflect the complexity of how the technology is really used. This is not surprising: concerns about technology as a threat to the social order, particularly in matters of sexuality and intimacy, go back much further than Internet dating and cell phones. From the boxcar (critics worried that it could transport those of loose moral character from town to town) to the automobile (which gave young people a private space for sexual activity) to reproductive technologies like in vitro fertilization, technological innovations that affect intimate life have always prompted angst. Often, these fears have resulted in what sociologists call a “moral panic”—an episode of exaggerated public anxiety over a perceived threat to social order. (here)

I don’t necessarily want to argue that the “digitally enhanced” zoo visits are somehow intrinsically less intimate than those individuals and groups unencumbered by the gadgetry.  But, I found it difficult not to come to that conclusion.  It did seem to inhibit conversation, and much of the conversations that I did overhear focused on the technology in some way (e.g., “Let me see your shot,” “check out this picture,” “that’s pretty good, but I got a way better one of that lizard thing.”).

Part of me—summoning the grumpy old person who resides in waiting somewhere in my mind—wanted to say, “Hey kid, that picture of a lion is pretty cool.  But, that thing over there.  Yeah, that thing.  That’s ACTUALLY a lion.”  And the self-righteous parent inside of me was saying,

“That’s fine for those kids, but MY child would NEVER do that.”  Also, it wasn’t only kids.  But another part of me thought, “What would CJ say?”  (Patent pending for “WWCJS?” bracelets and acronym.)  There is absolutely a transformation in experiences.  But whether those experiences are more or less valuable, meaningful, or intimate is probably premature.

In some ways, we accomplish similar things more effectively with these technologies.  Thinking of DeVault’s work on the production of family through zoo visits, sharing photos is a quick and easy way that help children learn to “see” what “we” look at when we go to the zoo.  It’s also a way to understand what kinds of things about the things we look at merit special attention, are worthy of conversation, etc.  It also enables us to revisit some of these interaction cues after we’ve left (practice for next time). 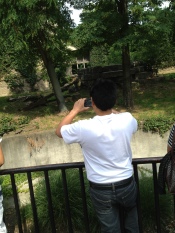 I remember reading about some fascinating research in Malcolm Gladwell’s Blink concerning how artists look at paintings.  Apparently they don’t look at the painting in the same way we do.  The rest of us tend to look at faces and other objects of interest first and then turn our attention to other areas on the canvas.  Artists visually navigate paintings beginning at the borders and moving in.  I wonder if families or other groups share similar patterns of looking at things, or whether those that do are closer than those that don’t.  Just a thought…

3 thoughts on “On the Significance of Digitally Documenting Zoo Visits”