The Human Rights Campaign (HRC) created an image of a pink equal sign on a red background to signify support for gay marriage as the Supreme Court began meeting to consider the future of same-sex marriage in the U.S. The image was promoted by HRC in a variety of ways,

and if your friend group is anything like mine, you probably saw facebook go red around the end of March in 2013. The meme took on a variety fo different forms, but the HRC image was the foundation. Martha Stewart’s iteration was my personal favorite (the red velvet cake to the right).

This is consistent with demographic data on shifts in American opinions about same-sex marriage and sexual equality more generally. For instance, a recent report released by the Pew Center documented that about 50% of Americans favor the legalization of same-sex marriage. But this conceals generational discrepancies in support like the fact that 70% of individuals born after 1980 favor same-sex marriage compared with less than 40% of baby boomers.

The report that facebook released about this was really interesting. One of the ways that they illustrated this shift was spatially. They were able to document the various likelihoods that people in counties across the U.S. would change their facebook profile picture on the 26th. This doesn’t necessarily mean they changed their profile pictures to an HRC image, but it’s a decent proxy considering the number of facebook users in the U.S. The report produced the map below. The darker areas had the highest volume of profile image uploads. 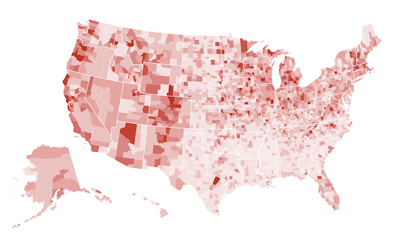 The facebook report also noted that the largest increases in profile photo activity were in college towns. Though, I’m tempted to say that might be because college students are on facebook more than almost anyone else (aside from their professors of course).

While changing your facebook profile picture to support same-sex marriage is dramatically different from protesting on the steps of the Supreme Court Building, activism and protest take a diversity of forms today. This is not to deny criticism of HRC’s use of their logo for this purpose. But, like the changes in profile photos, the map that facebook produced also went viral. Certainly support for marriage equality is significant, and a map of the U.S. depicting “hot spots” of supporters is important. Yet, it also has the capacity to conceal other ways we might measure sexual prejudice.

Facebook’s map is a graphic illustration of some of the ways that Americans “voiced” their support for same-sex marriage. But, it’s also true that sexual inequality is much more complicated than facebook profile pictures might be able to capture. As Michael Kimmel wrote in a Huffington Post article dealing with the meaning of the public reaction to Jason Collins coming out,

What Kimmel means is that sexual prejudice and heteronormativity are perpetuated in ways that go far beyond opinion polls. They are institutionalized, embedded in our culture. Another way of measuring sexual prejudice might be to assess contemporary use of derogatory sexual epithets (like “fag,” “dyke,” “no homo,” etc.). For instance, the Institute for Sexual Minority Studies and Services at the University of Alberta developed a website (NoHomophobes.com) that tracks the use of derogatory sexual epithets on Twitter. Below is a screen shot of the frequencies since they started the project.

If social spaces were perfectly homogenous in terms of support for sexual equality, we’d expect a mirror image of facebook’s map. And while we do see a high volume of sexually prejudiced tweets in many of the areas of the country in which facebook’s map illustrated the least support for same-sex marriage (depicted as the least red areas on their map), there’s also considerable overlap with much of the data.

My take is that these two maps are an illustration of how complex systems of inequality actually are. While supporting same-sex marriage by changing your facebook profile picture and tweeting “faggot” are contradictory, sociological research has long illustrated that individuals are contradictory in precisely these kinds of ways. Inequalities are slippery and perpetuated in a variety of different ways. Measuring progress with support for single issues is important. But what it means that lots of people decided to change their profile pictures on March 26th or even that they are expressing less sexual prejudice on opinion polls is less clear.

2 thoughts on “The Geography of Love (and Hate)”