JeungMee Yoon’s “The Pink and Blue Project” has garnered quite a bit of attention.  The photographs are visually jarring. 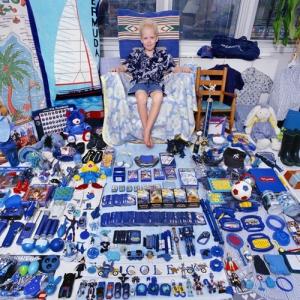 Positioning girls and boys in the midst of the sea of their own pink or blue objects is a powerful statement about gender, consumption, and globalization.  Yoon got interested in the project through her own struggles as a parent.

The Pink and Blue Projects were initiated by my five-year-old daughter, who loves the color pink so much that she wanted to wear only pink clothes and play with only pink toys and objects. I discovered that my daughter’s case was not unusual. In the United States, South Korea and elsewhere, most young girls love pink clothing, accessories and toys. This phenomenon is widespread among children of various ethnic groups regardless of their cultural backgrounds. Perhaps it is the influence of pervasive commercial advertisements aimed at little girls and their parents, such as the universally popular Barbie and Hello Kitty merchandise that has developed into a modern trend. (here)

Indeed, these struggles are the same that led Peggy Orenstein to write Cinderella At My Daughter: Dispatches from the Front Lines of the New Girlie-Girl Culture.  As both Yoon and Orenstein show, pink and blue are about so much more than colors.  These colors structure children’s lives in intricate ways.  D’Lane Compton and I posted on similar issues with respect to children’s clothing and the gendering of parenting products (here).

The objects we fill our children’s rooms with tell us a great deal about our culture and they structure the ways children experience the world around them.  While “princess culture” gets a lot of attention, it’s probably fair to say that the ways boy’s objects and identities are similarly gendered with all variety of “blue” is less discussed.

Of the many insights to be made in examining these photographs, something that initially struck me was not only the color of the objects (as difficult as that is to ignore here), but the objects themselves.  I often ask my students to talk about “boy’s” and “girl’s” toys, what these classifications mean, how they are culturally encouraged and enforced, and what kinds of consequences might result from them. 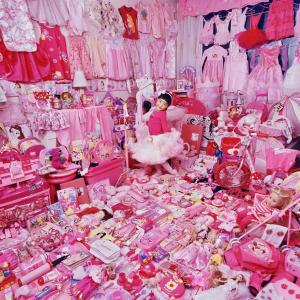 It’s not universally true, but the pink pictures have a great deal more objects to use in training, disciplining, caring for, and accessorizing the body.  So, fake blow dryers and hair care products, combs, brushes, mirrors, nail polish, makeup, jewelry, and clothing are in much more abundance in the pink rooms.  It’s hard not to think about the ways that these products that fill young girls’ closets, rooms, and bathrooms play a role in priming them for a culture that sexualizes women and girls.

Boys’ rooms are filled with fewer clothes and fewer tools for preening and primping the body for public display.  Rather, musical instruments, tools, sports equipment, action figures, video games, educational toys, and more fill the boys’ rooms.  Children learn a great deal from what we present them with to play.

Anne Fausto-Sterling refers to these objects as part of a cultural process of “gender fortification” (here), whereby we participate in erecting barriers and boundaries between “masculinity” and “femininity.”  The work that goes into this boundary maintenance often goes unnoticed or is casually disregarded as “natural”—a practice that enables us to either ignore or conceal all of the work that goes into to making these boundaries meaningful.  “Pinking” our daughters’ rooms and “blue’ing” our sons’ is one of the ways that we create gendered spaces within the home.  And while it’s easy to place responsibility for this firmly on parents’ shoulders, this is a much larger issue.

Placing the blame on parents is based on a overly simplistic conceptualization of socialization whereby children are seen as incredibly malleable and parents as having unchecked power over their children’s identities, behaviors, interests, and more.  An increasingly globalized market presents options to parents.  Children’s toy and clothing stores are structurally designed in ways that require knowledge of the power and meaning of “pink” and “blue.”  And that children in Japan and South Korea can buy Barbies, while American girls outfit themselves with Hello Kitty paraphernalia speaks to the ways that gendered products and meanings are part of a global exchange.  While it may be true that the meanings associated with the gendered products that we import and export differ to varying degrees by location, the cross-cultural similarities in children’s rooms and objects that Yoon documents is incredible (and just a bit terrifying).

When we assume pink and blue are “naturally” associated with girls and boys, we miss the opportunity to discuss the social and cultural forces at work that fill Steve’s and Kihun’s rooms with the same objects and aesthetics or that structure SeoWoo’s and Tess’ experiences of childhood and how they learn what it means to “be a girl” despite the oceans, languages, and all manner of cultural differences that separate them.

Inequality is not difficult to “spot” here.  But, focusing solely on the ways in which these objects play a role in perpetuating systems of gender and sexual inequality fails to recognize the intense pleasure they provide as well.  As Raewyn Connell writes, “Gender arrangements are… at the same time, sources of pleasure, recognition and identity, and sources of injustice and harm.  This means that gender is inherently political–but it also means that politics can be complicated and difficult” (here: 7).  Thus, gender and sexual inequality are only fully understood when there considered simultaneously as sources of pleasure and pain.  It is for this very reason that parents struggle with these decisions.  Not wanting your daughter to dress up as a princess for Halloween is probably easy enough to imagine.  Parents that might experience this struggle sometimes “give in,” in part, because they recognize the ways that these colors, objects and identities  that structure children’s worlds may promote powerful systems of inequality and injustice, but they are simultaneously sources of intense pleasure and play.  These cultural tensions take on physical forms as we gender spaces in our homes in ways that reflect (and sometimes challenge) them.