Occupational sex segregation is really nothing new. As more and more women entered the workforce, they were often headed into different spaces from the men (sometimes entirely different physical locations, and sometimes only subtly differentiated spaces). This might mean different buildings, but even within buildings, occupations can be sex segregated. So, women and men are both working. But this simple statement disguises the fact that they’re not necessarily doing the same work–not precisely. In fact, it’s a smaller proportion of people than you might think who work alongside someone doing the same work, with the same occupational title, on the same shift. Approximately 1 in 10 workers in the U.S. labor force fit this description of a gender-integrated occupation. So, if you’re one of them, take a moment to count yourself lucky and consider just how truly odd you are.

Roughly one third of the 66,000,000 women in the workforce in the early 2000’s could be accounted for by only 10 (of the 503) occupations listed on the U.S. Census. That’s occupational segregation! The “occupational ghettos” that have been feminized are often “rewarded” with more care work, less pay, and lower levels of cultural status and prestige. These are the jobs we sometimes refer to as “pink-collar work.” Some of men’s occupational preserves are rewarded with higher status, more money, and a great deal of power. But this is not true of all of men’s jobs. 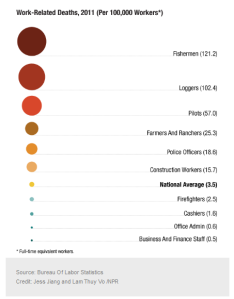 NPR’s “Planet Money” blog just ran a story on the jobs with the highest rates of work-related deaths–the “deadliest jobs”. Collecting data from the Bureau of Labor Statistics for 2011, they produced the graph here (right) to illustrate those jobs with some of the highest (and lowest) rates of on-the-job deaths compared with the national average of 3.5 deaths per 100,000 full-time (or equivalent) employed persons.

It’s an interesting image. But in the short post, I was struck that gender was not mentioned once. Looking down the list of jobs with the highest work-related deaths listed, gender seemed to jump out of the figure at me (fishermen, loggers, pilots, farmers and ranchers, police officers, construction workers). These are all jobs that most Americans probably picture a man “doing.” 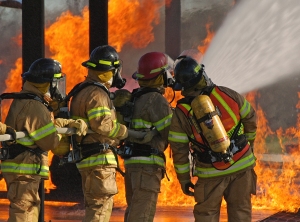 SIDE NOTE: One of the most interesting findings depicted is the fact that firefighters actually have a lower on-the-job death rate than the national average. This is a fact we might be hard-pressed to think given their cultural apotheosis. Firemen have a bit of a reputation for putting themselves in harm’s way, and if I had to guess prior to seeing this graph, I’d have guessed that they would at the very least have ranked above the national average for work-related deaths. Turns out, it’s a career with about as much danger of death as “personal and laundry services.” Who knew? Surely this is partially accounted for by–as the post on Planet Money explains–fewer structural fires due to increased safety standards, etc. But, it’s still an interesting statistic. 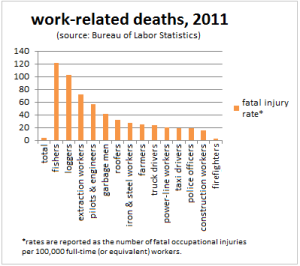 I went through the data used to produce the article from the Bureau of Labor Statistics (here), and collected a few more occupations that were significantly above the national average (3.5 per 100,000). While the author of the piece on NPR reported some of the highest outliers (like the fishing industry, loggers, and pilots), there were other jobs not reported that seemed relevant to make some general comments on gender and job-related death. My graph is to the left here (I kept firefighters in for fun). Then, I checked the gender composition for each of the jobs that ranked highest on work-related deaths (here). These results are illustrated as pie charts for each of the occupations I included (see image on the right).

Women were the most significant proportion of farmers of all the occupations listed among those with the highest work-related death rates–but, even here, women only accounted for roughly 21%. In many of the occupations listed, women don’t even fully account for a percentage of the workforce (like fishermen, loggers, stone workers (here: “extraction workers”), iron and steel workers, and power-line workers.

This matters because danger at work is inequitably distributed. And it’s not just inequitably distributed by gender, but also–and significantly–by race and class. I’ve posted on the masculinization of risks to personal health before (here), but this struck me as a really interesting illustration. Men are simply dramatically more likely to be killed because of their work than are women. In fact, in 2011, men accounted for approximately 92% of work-related deaths.

One way of making sense of this is to say that men are choosing these jobs in some sense, or that men are responsible for preserving a “masculine” culture within these occupations, making them undesirable work spaces for women. And, if Kris Paap’s work on the construction industry is any indication, there’s certainly some merit to this argument. But, to say that men are “choosing” these occupations as though all others are equally available is to miss the (sociological) point. We are tracked into occupations in a variety of ways, often subtly, but sometimes in ways that are almost unimaginably without subtlety. And this is not to say that all “masculine” occupations have high rates of work-related death. Firefighters are but one example. Though they rank below the national average, it remains an extremely male-dominated occupation.

Men’s work-related deaths are a wonderful illustration of what feminist scholars of masculinities mean when they argue that ideologies of masculinity don’t only harm women; they harm men as well.

To conclude, it’s worth noting that the occupations listed as ranking among the “deadliest” here include only civilian jobs. Including military occupations opens up an entirely different discussion–not to mention the fact that the numbers of work-related death in the military would simply dwarf civilian work-related deaths. As the Pentagon has recently moved to permit women on the front lines of military combat, it seemed an appropriate time for this post. I’m struggling with how I feel about this. So, I think I’ll just finish with some questions: Does women’s ability to more equitably share in the risks associated with men’s various preserves (along with their privileges and advantages) indicate a move toward gender equality? Or, is women’s entry to the front lines more accurately understood–as Noah Bertlasky suggests–as “acquiescence to war as a moral force and a moral standard” (here)?

I just noticed that The Atlantic ran a story on this as well and did briefly mention some issues I bring up here (click here for the post).

8 thoughts on “Notes on Gender and Work-Related Death”