I caught an interesting story on NPR on the way home from work yesterday about changes in the ways in which we’re looking at data with respect to recidivism rates—the rate at which individuals who have been to prison or jail re-offend and end up back in those same institutions.  For a long time, scholars looked at mapped crime rates for different areas, and different organizations and institutions used this information in different ways.  So, police may have used that data to bulk up the police presence in areas that showed high rates of crime (so-called “impact zones“), while others more concerned with social services and welfare could have discussed the presence or lack of resources in those areas.

More recently, however, scholars investigating this have begun to consider new ways of conceptualizing the relationship between crime and space.  The story on NPR discussed a new method of mapping that tells a different story.  Scholars refer to the new method as “incarceration mapping” as opposed to “crime mapping.”  Crime mapping uses GIS to map where crimes occur.  Incarceration mapping collects data on the prison and jail populations asking where they live (along with a host of other demographic variables).  With this collection of home addresses, scholars are able to identity the various rates of different neighborhoods and communities with respect to who is going to prison and jail.  And with this data, they’re able to estimate how much money state and federal governments are spending to incarcerate people in specific neighborhoods and communities (see the figure to the left for an example). 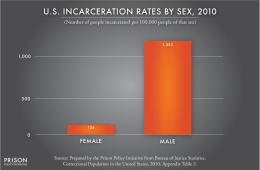 This concerns gender as the overwhelming majority of people in jail and prison is the U.S. are men—and non-white men are disproportionately represented as well (see here and here).*  I happened to have just finished two books that gave me some context to think about this—Victor Rios’ (2011), Punished: Policing the Lives of Black and Latino Boys and Adam Reich’s (2010), Hidden Truth: Young Men Navigating Lives In and Out of Juvenile Prison (I posted here on both).

What interested me about the story I heard was how, after policy-makers, legislators, city council members, and researchers got hold of this data, the ways in which they talked about crime and criminality shifted.  It shifted from a conversation about individuals to a conversation about space.  For instance, some of the research surrounds communities with high incarceration rates within and around New Haven, CT.  This way of visualizing crime played a role in changing how people understood criminal activity.  On the radio, they said it this way:

One of the things we noticed right away when legislators and others started to see this, is they talked about this issue differently. Instead of getting stuck in the “being soft, get tough” paradox, they started to talk about neighborhoods …

In conversations about crime, it’s easy to focus on criminals, but the superficial conversations about “pathological” individual criminals conceals a more sociological focus on the conditions under which–and the social spaces within which–crime occurs.  When presented with maps illustrating the neighborhoods with high rates of incarceration, people began to talk less about the criminals themselves and more about communities.  The shift in visualization (from looking at where crimes occur to where those we incarcerate live), according to the interview, was accompanied by a seemingly heightened sociological analysis of the “problem.”

For example, in Connecticut, legislators started to talk there about the Hill neighborhood [in New Haven] … and why were we spending $6 million a year to remove and return a whole range of people for technical violations, when we could be investing some of those dollars in the social and economic well-being of those places?

It also enabled people to be able to look into the resources already present in and around the neighborhoods with high incarceration rates.  Rather than coming into communities with teams of “outsiders,” and bringing something new, efforts might be better spent on utilizing the existing resources and infrastructure within these communities to affect change.

Some of the programs that were highlighted in the broadcast seemed to have some of the qualities that both Rios and Reich advocate.  Rather than simply working to “resocialize” or “train” men (primarily) who come out of our prisons and jails, Rios and Reich argue that helping young men develop a political consciousness and a critical analysis of crime as structured action play a significant role in helping men to avoid the more toxic and criminal elements of masculinities in their neighborhoods.  Incarceration mapping seems like a tool that might be effectively utilized toward these efforts as well.

It’s an interesting story about how the ways in which we think about the spaces within which crime occurs might shift our attention from the individuals who commit crimes to a more sociological and productive focus on the social forces and resources that structure people’s lives in communities with high rates of incarceration.

*A small disclaimer–This issue is far outside my area of expertise, but I was struck by the attention to space.  While the story ignored issues of gender, I couldn’t help but think about how gender might enrich this analysis.  How do high rates of incarceration affect family formation practices and processes, issues of status, identity, and “respect” in young men’s and women’s peer cultures, and more?  I’ll be discussing some of this in a future post on Rios’ and Reich’s books, but it’s an issue I thought I’d briefly raise here as well.